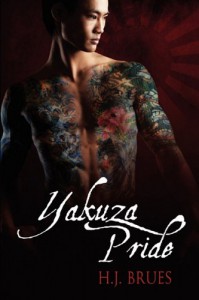 Take a detailed tour into the Yakuza way of life. If this is how the Yakuza code is really like, I can see why it is so appealing. Ms. Brues creates a rich world showcasing both Japanese culture and gangster code of honour. I bought into it all. If this is all researched well, I have just taken an intermediate history course and loved every single second of it.

This story is hard to classify because it is more than just m/m erotica. The world building in this book is phenomenal. I felt as if I visited Japan after reading it. I could visualize every place described. The characters in this book are richly created. What is most impressive is the intricate relationship nuances Ms. Brues uses to educate Westerns. She does it so masterfully it doesn't feel like a lecture. Instead it's a colorful painting lovingly depicted across an entire wall. The details are so clear, a reader is able to learn so much, just by examining a piece of it.

Kenneth Harris is the black sheep of his family. Not only is he an artist, he's gay. For most families this may not be a big thing. For Kenneth, it is, because his father is a well-known senator who is ashamed of his son. If Kenneth were to cease to exist, his life would be better. Kenneth, never fitting in anywhere, travels to Japan to stay with a close friend. While visiting in an open-ended vacation, he meets Shigure Matsunaga. A spark immediately generates between the two of them. Kenneth doesn't know Shigure is a high ranking Yakuza underboss. When the two start a relationship, it kicks off a series of terrible events.

This is a dark book. Dark because it shows the pettiness of humanity. It shows the judgmental unaccepting attitudes of both Easterners and Westerners. For those who don't fit the social norm, they are constantly disparaged and disrespected in this book. My heart hurts for Kenneth. He's a survivor who is constantly disappointed by his family, friends and even his lover. Through this all, Kenneth is still a fighter and he is amazing. Even through a horrific event, Kenneth is still able to rise above it and conquer. Kenneth is truly a remarkable character. He uneasily straddles both the Eastern and Western world. Whilst one would think this means he can easily slip from one to the other, this is not the case. He is not welcome in either. This is a very hard place to be, where a person is unwanted. This hits home as a first generation Asian raised in a Western society. I think it's harder for Kenneth because he is an American whose formative years are from the Eastern society.

There are several subplots in this story which all culminate to an explosive climax and a stunning conclusion. The book will take a reader through highs and lows. The sweet love between Kenneth and Shigure is lovely. The brotherhood of the Yakuza is fascinating. The integration of two totally different cultures to become something new is inspiring. The relationship between lovers, friends and family is what makes this book so good and a must read. Be prepared, as there are parts which may sicken a sensitive reader. For those who thrive on Disney fairy tale, take heed. This is a Grimm fairy tale. The ending is great and it does redeem humanity.

Recommended for m/m romance readers who want a book filled with complexity due to cultural differences instead of drama lamas.
Tweet