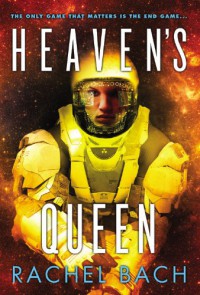 3.5 stars for a satisfying ending. Based on some of the reviews I read, I started this book with trepidation. There are times where I'm just not interested in a love interest. I'm happy to say the romantic element to this trilogy is just right. It isn't overwhelming and even though a surprise character showed up declaring love, it did not detract from the story for me.

Devi is back and she is now complete with her memories. The problem is, everyone is gunning for her as she could be the ultimate weapon to finally get rid of the phantoms. With Rupert at her side, how can she fail?

There are ups and downs in this story. Even the pace seemed a bit up and down. The questions we've had about the phantoms and Mata are finally answered. In fact, when it's all explained, I wondered why I even had questions because it made so much sense. I should have been able to predict it and yet I didn't. Ms. Bach does a good job of setting up the whys and tying up all the loose ends.

The characters in this book are a doozy. To be clear, I loved Devi through every book. She's pretty kick ass and I genuinely liked this character. She's honest and does the right thing. She's focus and she knows what she wants. She never rationalizes nor justifies what she categorizes as immoral behaviour. She is driven and she goes big. Her definition of self-sacrifice is pretty much on par with what a good guy superhero would be. What is confusing is all the other characters. I'm a bit dizzy with liking them and then hating them. Almost all the other characters in this series I love to hate them. Caldswell is an asshole. He and Benton are anti-heroes coming from different directions. I didn't even know they could both be so similar yet diametrical opposites. It boggles the mind. Rupert as Devi's champion and tarnished white knight is fabulous. I love him. The crew of Glorious Fool are hard to like at times. The way they behave towards Devi is totally consistent with their loyalties to Caldswell. It doesn't make me like them any more because at times their priorities oppose Devi's purposes. The only one who is adorable is Nova. She's a loopy one.

Why am I so frustrated with those opposing Devi? Because she is right and she knows it. She is taking the risk and she's going big. The lack of support from others is annoying because they are stuck in a rut and they don't see the end game. What is admirable about Ms. Bach is how she is able to show the other perspective so that Devi gets why they won't let her carry out her end game. Still, Devi persists and I have to admire her tenacity. The ending wrapped up fast and it was glorious. Devi's one wish is granted. This happily ever after is satisfying even as it makes me wonder about King Stephen. This action packed sci-fi is recommended to those who root for the underdog.
Tweet