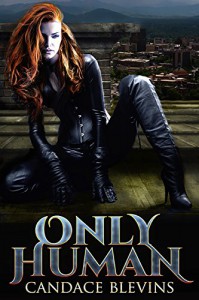 In this story, Kirsten is a human. That is all she is to her knowledge. She does have a special skill to help hunt supernaturals. She's a bit like Buffy the Vampire Slayer but a lot more mature and way kinkier. Her day job is as a therapist (every character must have a flaw). Kirsten leads a pretty happy life with a good part time boss, Aaron Drake who is a Dragon. She is a single mother by choice who adopted a Chinese orphan from China. And she's able to shoot lasers out of her hands to kill demons. What's not to like about her?

From a world building perspective, it's just unfolding. I can't wait to read more about it. It is familiar to many who read paranormal romance and urban fantasy. What Ms. Blevins does is blend it with some mythological figures which may bring a smile to many readers face.

I love the characters in this story. What I like is that they are not infallible. They make mistakes and own up to them. There are several hot dominant males in this story. They kept me at a constant humming erotic haze and I fantasized about submitting to them. As each alpha male Dominant appears, I respond the same way as Kirsten - panting with desire and doing my best to stay calm. Ms. Blevins doesn't even have any intercourse in this story until the very end and yet this book is erotically explosive because she is able to capture the D/s dynamic so well. For those who are D/s lovers, this book will rock you. Each of the dominants make me want to kneel down and whimper for just a taste of their dominance.

Lastly, I must note the Chinese part to this story. It is very clear to me Ms. Blevins did her research into China and probably has visited China. The two secondary characters in here which are Chinese are very accurate and makes me happy. They aren't some white character with a Chinese name. Ms. Blevins is able to translate the nuances of being Chinese for these two characters and I love her for it. I can't wait to read the next book in this series. This urban fantasy is highly recommended to kinky readers who love mentally stable heroines who are strong, sexy and still be sexually submissive.